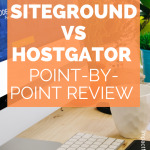 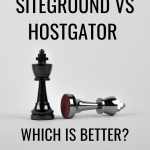 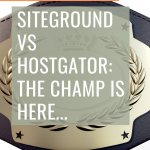 If you’re looking at SiteGround vs Hostgator and trying to figure out which web host is right for you, you’ve come to the right place.

In this review, I hold nothing back and take you through 16 all important areas of web hosting and tell you how they both stack up.

Let’s get into it.

SiteGround and HostGator are both excellent, popular hosting services that have a lot to love about them.

Both of them host thousands upon thousands of popular sites today. In recent years, SiteGround has been distinguishing itself from other shared hosting providers, by dramatically increasing the reliability and responsiveness of its services.

Here’s a head-to-head comparison of SiteGround and HostGator, as they are now.

Both SiteGround and HostGator are often recommended for beginners, especially those who are looking to set up a simple commercial site or a WordPress site.

But there are a few areas in which SiteGround has a sizeable lead. HostGator tends to use older versions of cPanel, which lag behind in usability standards.

SiteGround not only has cPanel, but also their own proprietary Site Tools system. Site Tools is a clean, modern GUI for both beginning and advanced developers, and makes it possible for people to start a website without having to learn to program.

However, as a beginner, both SiteGround and HostGator will be easy to use. Services such as WordPress are one-click installs that are completely handled for them. So while SiteGround does win this category, it’s close to a tie.

In terms of popularity, both HostGator and SiteGround are extremely popular.

HostGator has more active users than SiteGround, but SiteGround has been growing much faster. That makes it a little difficult to compare the two, and draws them out into a tie.

It’s likely that within the next few years, SiteGround will eclipse the more popular hosts such as BlueHost and HostGator, due to its aggressive growth. Over the last few years, it’s been essentially doubling its popularity every year.

Both HostGator and SiteGround have similar features because they both use cPanel. cPanel is a back-end control system that lets the webmaster modify their website, email accounts, domains, and more—everything to do with the hosting service.

So why does SiteGround win the category?

It’s because of the internal Site Tools system again. WYSWIYG editors like Site Tools require no programming knowledge, and provide an easy way for webmasters to administer their site through one-click installs and other features.

Regardless, in terms of features, both HostGator and SiteGround perform extremely well.

HostGator is unmetered across its services, which theoretically makes it better for high traffic sites.

Of course, this does come at a cost. Because HostGator provides unmetered resources to its customers, it does have slower and less reliable performance.

It’s also not truly unmetered. If an individual on a shared server starts consuming too many resources from that shared server, it will often get throttled.

HostGator may come in and look at the customer’s settings and ask the customer to make some changes to their settings, or to upgrade their package. Thus, while there’s no written limit, there is an unspoken limit.

Still, in terms of raw numbers, HostGator wins. If the 10,000 visitor limit on SiteGround could cause you distress, HostGator is the best choice.

SiteGround begins with a single domain allowed, but the mid-tier product ($5.95 a month) allows for unlimited domains.

Similarly, HostGator’s lowest tier service offers 1 domain a month, and you need to upgrade to their $3.95 plan for unlimited domains. Neither plan allows for free included domains, though there are occasional promotions through each company.

Apart from the amount of domains available, both SiteGround and HostGator provide for very similar domain management. Users are able to purchase only domains and link them elsewhere, or are able to update their domain settings for content delivery networks and other more advanced solutions.

Both SiteGround and HostGator have optimized plans for WordPress.

These are planes that have one-click WordPress installs, walk you through the process of developing your WordPress site, and are optimized for optimal resource management. They also often have free and paid templates for WordPress available.

So, with this in consideration, SiteGround is the winner here.

SiteGround wins because they’re faster and more powerful. WordPress surprisingly takes up a lot in terms of system performance, as it’s become a more advanced platform with each passing year.

Hosting services that don’t have enough resources to support WordPress are going to see slower sites, and slower WordPress sites are slow. SiteGround’s lightning fast performance really gives it an edge here as far as WordPress blogs are considered.

Along with your domain name, you may also want access to email accounts.

There are unlimited email accounts available with either SiteGround or HostGator. Since both of them manage web mail through cPanel, they have an extremely similar experience.

Email accounts can also be added to an email platform you prefer, such as Outlook.

This is an area in which SiteGround is a clear winner, and not only against HostGator, but also against other major web hosting companies.

SiteGround’s speed has been measured at being 1.5 times faster than HostGator. And speed is everything when it comes to the webhosting world.

Speed is likely one of SiteGround’s most significant assets, as well as why it’s become popular so quickly. SiteGround uses SSD servers, up-to-date software releases, and a robust caching system specifically to boost their speeds.

Studies have shown that users won’t wait more than a few seconds for a website to load before bouncing to another site. Even a small delay could cause your site to go ignored, not only by people, but also (as a consequence) search engines.

HostGator and SiteGround are both able to provide uptime sufficient for nearly any site.

For eCommerce portals and other high traffic venues, uptime is, of course, more important. Both SiteGround and HostGator were able to deliver 99.9% uptime, which is what they guaranteed.

This is a minimal difference that won’t make a significant impact on most websites, but it could impact some.

HostGator, like most shared servers, assigns you to one of their many server locations. It does try to do so in a way that will increase network efficiency, which helps HostGator as much as the customers.

SiteGround has an expert team that will transfer your website for you. HostGator provides a free transfer and cPanel transfer with even its shared, low tier accounts.

Migration means that if you have a site already setup, you’ll be able to transition it quickly to your new provider.

As you grow, you may need to upgrade your account. Both HostGator and SiteGround are tied in this category, but for different reasons.

Technically, HostGator gives you more as you upgrade. You have unmetered visitors, unlimited web space, and unlimited email accounts.

But while SiteGround gives you less (you’re limited to 100,000 visitors a month under their Go Geek plan, and you’re limited to 30 GB of web space), it also provides for better stability, security, and speed specifically because it isn’t offering unmetered services to everyone.

Both SiteGround and HostGator provide SSL and other security measures, and are comparable to each other.

When it comes to security, a great deal will have to do with the webmaster as well. But SiteGround and HostGator keep their systems up to date and patched, which is what’s most important from a web hosting service.

SiteGround is known for their excellent customer support.

Under HostGator, you’ll receive the support that you need, but it’ll usually take some time. Not everyone needs extensive customer support, and you may be a relatively hands-off customer who prefers to work on their own.

If you do need responsive support, SiteGround is going to be the best choice. The cheaper, more prolific services of HostGator means that each individual customer may not be able to demand as much attention.

That being said, most web developers would be hard-pressed to fill up 10 GB of space, even with an older, more extensive website.

This is a major reason that HostGator is still popular and why some people will choose HostGator over the competition.

HostGator is one of the cheapest options out there. This is especially true if you’re going to find yourself running multiple sites.

The lowest price for SiteGround is $3.95 a month, which is their “Start Up” plan. The lowest for HostGator is $2.75 a month.

The Bottom Line: SiteGround or HostGator?

SiteGround and HostGator are both very close in functionality. HostGator’s been around for a long time, and it’s remained popular over the last decade.

SiteGround is quickly catching up, and has grown in popularity in leaps and bounds within the last few years. Which host is best for you is going to depend on your needs.

There’s no argument that HostGator provides an exceptional service for a low cost, and HostGator’s services are going to be sufficient for quite a few low-resource users.

However, SiteGround does provide markedly improved performance at only a little more in terms of cost. For businesses, larger blogs, and larger WordPress installations, there’s a clear benefit to working with SiteGround. For that reason, we choose SiteGround.