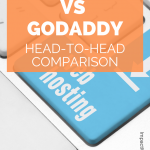 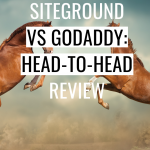 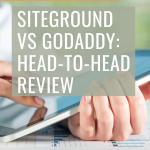 Any SiteGround vs GoDaddy review will tell you that both of these companies are exceptional web hosting companies. Both are affordable, reliable, and robust.

If you’re on the fence and trying to pick a winner between these two giants, then you’ve come to the right place. I’m going to give you a head-to-head comparison and then pick a winner for you.

On paper, both of these companies might seem evenly matched. SiteGround, which was founded in 2004 and is based in Sofia, Bulgaria, is home to more than 2 million domains.

On the other hand you have GoDaddy. A company that is very well known and started in the industry back in 1997. Currently, GoDaddy has more than 18.5 million customers.

But there are differences in services, depending on what a customer needs. Here’s a complete overview of SiteGround vs GoDaddy in terms of features, cost, and more.

Both GoDaddy and SiteGround are remarkably easy to use. Especially compared to how hosting services used to be just ten years ago.

GoDaddy has 100+ one-click install solutions, while SiteGround has its own easy-to-use backend. Most people won’t find either GoDaddy or SiteGround challenging to use.

GoDaddy is undeniably more popular than SiteGround, by a factor of about 10x. But SiteGround has rapidly become more popular in the past few years, whereas GoDaddy has somewhat plateaued.

GoDaddy has been around for nearly ten years longer than SiteGround, and is known to be an affordable, simple option.

In terms of raw features, GoDaddy is likely the winner. GoDaddy has been around for over two decades, and has consequently developed a suite of one-click features, in addition to using the cPanel hosting portal.

Most web developers will be able to create a GoDaddy account and launch a website in just a few minutes, depending on what they want to do.

SiteGround has a fairly strict bandwidth limit. The StartUp site is for 10,000 visitors monthly, whereas GoDaddy’s accounts are unlimited.

However, these limitations make it so that there isn’t an excess of resources used by any individual client, and it’s what makes their services fast. For most websites, these bandwidth limits won’t be an issue.

GoDaddy started off primarily selling domains, and it shows. With GoDaddy, you can get a free domain with your web hosting service. With SiteGround, you still need to pay.

Apart from the cost of the service, there’s little else to talk about here. Both have easy ways to manage DNS settings, and both of them have DNS servers that resolve quickly and effectively.

SiteGround additionally has the advantage of automatic WordPress updates, built-in staging sites, and server-level caching, all of which improve performance.

Both SiteGround and GoDaddy support multiple webmail services, and both of them allow you to create email addresses with your hosting service.

In our review, we couldn’t see any significant performance difference in either, and emails seemed to be just as responsive through either service.

Since SiteGround has more limitations on space and bandwidth, it’s possible that those with particularly heavy email volume could be affected on the SiteGround service. But for the average user, there’s little difference.

When it comes to virtually all performance metrics, SiteGround blasts past the competition. SiteGround is faster than GoDaddy, especially for resource intensive sites such as WordPress sites.

However, this does vary depending on a lot of factors, such as server location as well. Since SiteGround and GoDaddy both provide ways of mitigating slow loading times (such as caching and CDNs), it also depends on how the site itself is configured.

99.98% uptime is hard to beat. In studies, SiteGround has outperformed nearly every competitor in terms of uptime. SiteGround is able to achieve this through its state-of-the-art technology.

That being said, GoDaddy’s 99.97% uptime is nothing to scoff at. GoDaddy doesn’t always achieve this uptime (in tests, SiteGround does appear to be better), but it’s still a fairly reliable service.

Both SiteGround and GoDaddy have multiple server locations. GoDaddy has 37,000 servers across 9 data centers, located in: Arizona, California, Illinois, Virginia, the Netherlands, and Singapore.

SiteGround offers site migration for those who want to migrate a pre-existing site, whereas those with GoDaddy will need to move their sites (such as WordPress sites) over manually.

While this isn’t a big deal for most experienced hosts, it can be a confusing process for those who haven’t done it before. SiteGround’s site migration doesn’t require anything but some information about the existing site.

Due to SiteGround’s superior performance, its scalability is higher than GoDaddy. While GoDaddy is well-suited to smaller sites, such as personal blogs, those who want to grow into their hosting service are going to see SiteGround as the better option.

Both SiteGround and GoDaddy have free backups for your hosting service, so you can at least rest assured that if your files are broken into or encrypted, you’ll be able to get them back.

SiteGround and GoDaddy are both veterans within the web hosting arena, and consequently have solid security. SSL is available for free with hosting accounts to further secure sites and data.

By all accounts, SiteGround’s staff is far more responsive and capable. While GoDaddy does have a number of ways to contact customer support, customer support tends to take a while to respond, and doesn’t always provide responses that are useful.

SiteGround has a ten minute response time to most requests, and tracks requests in the form of “help tickets,” so that you don’t lose your progress when speaking with multiple customer service representatives.

That’s enough disk space for virtually anyone who isn’t creating a large media library or archive system, but it’s also important because unlimited resources tend to bog systems down.

With GoDaddy, nearly everything is unlimited. In a shared hosting situation, the more resources other people use, the fewer resources are available overall.

GoDaddy is one of the most affordable options out there, both in terms of domain names and hosting. If you’re looking for a budget option, GoDaddy is the clear winner.

However, this can be seen as a double-edged sword. Being so cheap is why GoDaddy has so many customers, but it also means that its shared hosting resources are shared amongst more customers.

SiteGround is able to maintain its higher levels of performance by limiting this type of resource sharing, which also means that it does have slightly higher prices.

The Bottom Line: SiteGround or GoDaddy?

SiteGround’s robust performance and continually broadening feature set has made it a popular alternative to GoDaddy. While GoDaddy still has more customers than SiteGround, SiteGround is growing much faster than most of the competition.

SiteGround is able to provide a superior hosting service, especially when it comes to resource-intensive applications such as WordPress.

But that doesn’t mean SiteGround is better for everyone. GoDaddy is more affordable, which means that it lends itself well to small, low traffic sites, and applications still in development.

GoDaddy is popular for a reason: it has more than enough features for most people. So, while SiteGround may have the superior offering, there are still reasons why some customers would choose GoDaddy.

Is SiteGround any good?

SiteGround provides a superior hosting service, especially when it comes to resource-intensive applications such as WordPress. SiteGround’s robust performance and continually broadening feature set has helped it grow much faster than the competition. In studies, SiteGround has outperformed nearly every competitor in terms of uptime.

Is SiteGround better than GoDaddy?

Our Winner is SiteGround. In our tests SiteGround scored better than Godaddy in some of the most important statistical categories such as it’s lighting fast performance, support, uptime, and WordPress. Both hosts are WordPress approved, but SiteGround has the processing power and memory necessary to really make a WordPress site fly.

When it comes to virtually all performance metrics, SiteGround blasts past the competition. Speed is one of SiteGround’s most significant assets. SiteGround uses SSD servers, up-to-date software releases, and a robust caching system specifically to boost their speeds.