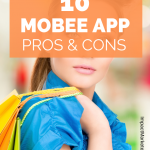 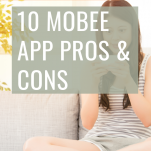 If you want to learn more about the Mobee App, then you have definitely come to the right place.

I personally joined the Mobee platform and took a look at a few missions in my area.

In this review, I will also share 10 Pros and Cons so you can determine if this app is right for you.

What Is The Mobee App?

The Mobee app is a free mobile app that can be downloaded on both iOS and Android platforms. This app gives reward points to members for shopping at popular retail stores.

People who use the app become a mystery shopper for the company and as you complete assignments you get paid through the app’s point system.

The points are your rewards. These points can be converted into cash, gifts, cards etc. With this app you have a legitimate way to earn.

As a mystery shopper, the app will pay you very quickly after you complete each assignment given to you. This opportunity is mainly location-based.

This means that the opportunities that you get will depend on where you are living. With more metropolitan areas having a higher earnings potential.

How Does The Mobee App Work?

The Mobee app was invented by a developer named Prahar Shah. Mr. Shah was a mystery shopper himself.

It was later in his career that he decided to develop this app in order to take mystery shopping to another level.

This app is mostly comprised of missions. A mission is a mystery shopping opportunity to earn points.

After a mission is claimed no one else can claim the mission.

The app has a GPS tracking device that ensures that the shopper is at the right store.

Below I share a couple of screenshots of missions from my area. I live in New York City so as you can see you have a lot of missions to go around.

The app mainly focuses on quick-service restaurants like Subway, Dunkin’ Donuts, McDonalds etc. But in my neck of the woods, there seems to be a ton of opportunities in grocery stores like Key Food, Stop & Shop, and BJ’s Wholesale Club.

When a user visits a store they pay like they would normally do. After completing a purchase, they then have to fill out the report through the Mobee app.

Once they do the task, they get a digital credit of $1 to $5 dollars instantly. The app also offers bonuses, which are double the amount credited to your account.

Sometimes the app requires that you take a photo of the receipt or the store to prove that the user was actually there at the store.

The steps to complete the mission and earn reward points are as follows:

Through activating the GPS, the app gets to know what your current location is. Next, it will show you the available mission list and you can choose the one that you like.

Sometimes they might ask you to take photos of the location.

After you give feedback and answer the questions, the app will review the mission within the next 48 hours. If your mission gets approved, you will be given reward points, which you can redeem as gift cards or cash.

Aside from all the above-mentioned steps, you can also earn by referring the app to your friends. Both you and your friends can claim 300 points when using a referral code.

How To Join The Mobee App

Joining the Mobee app is simple. All you have to do is download the app from the Apple App Store for the iOS platform, or the Google Play store for Android. And you can register right there on the app.

Once you register in the app, you will immediately see available missions near your location. All you have to do is choose a mission and get started.

How To Earn With The Mobee App

As I mentioned, the way to earn with Mobee starts with missions. Once you complete a mission, the mission will be reviewed by the app and you will get reward points, which you can redeem later.

For some missions you might be asked to make a purchase. The amount of your purchased is reimbursed as points that will added into your account.

As you complete missions, this also brings you closer to unlocking achievements as well as earning even more points. Here’s an example of some of the achievements that can be unlocked inside my members area.

All of the points you earn as rewards can be redeemed as gift cards or cash. The gift cards the app offers are from brands like Staples, eBay and other popular online stores.

When you redeem your points as cash, that amount will be sent through PayPal.

The gift card value starts from $5 and up. Five dollar gift cards are equivalent to 500 points.

NOTE: The minimum cash withdrawal is $50, which is 5000 points. The company gives gift cards starting at $5.

Pros and Cons of Mobee

Is The Mobee App Legit?

The Mobee App is definitely legit and a solid app for earning some extra income.

At the present time, the Mobee app is used by thousands of users and the company generates over $7 million annually in revenue.

I hope you found this Mobee App review helpful. As I mentioned, you can get started right away with missions that are in your area.

There’s a Key Food which is less than 100 feet away from where I live that offers missions in the app. There’s also a Dunkin’ Donuts within that same distance.

With the app I can earn a $5 cup of coffee as well utilize an easy way to make a few dollars shopping at a grocery store that I shop at any way.