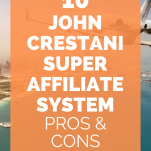 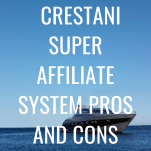 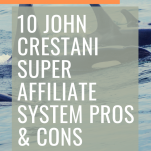 In this John Crestani Super Affiliate System review, I will share everything I know about this system.

I’ve personally joined this system and used it. So if you’re unsure about the program and want to know what it’s all about, you’ve come to the right place.

What is The Super Affiliate System?

The John Crestani Super Affiliate System is a program that shows people how to make money through affiliate marketing.

Before making SAS, Crestani first experimented with the Internet Jetset System, which cost $47 per month for users. It offered weekly webinars along with additional content that introduced users to the world of affiliate marketing.

Eventually, Crestani made the first iteration of the Super Affiliate System. But the SAS 1.0 was only available to previous students of Crestani that had achieved a certain level of success in terms of the commissions they were earning.

By the time SAS 3.0 came around, and now called SAS Pro, Crestani had expanded the offerings of his system, not to mention the people that could access it. Today, anyone can use the SAS to build an online business from the ground up.

Crestani provides access to a wide variety of marketing tools and templates. He also reveals some of the strategies he used to make his fortune. The program cannot deliver results overnight. It requires several weeks of study.

And even when you acquire the tools and the knowledge offered by the Super Affiliate System, you must put in the work to increase your conversions and income online. This system doesn’t promise success. It gives users the tools they need to succeed if they put in the work.

The Super Affiliate System Pro is a training course. Anyone that joins receives access to several weeks of extensive study. The system consists of a library of resources that include over 50 hours of video content.

The content is drip-fed to you every week. Every week there’s a live coaching call. There is also support through email when you need help. The platform also has a member’s community forum where you can network with other members.

Crestani has coaches that work directly with students, showing them how to either create an online business or boost their pre-existing business. You will learn how to use Facebook, Google, Native Ads, and Youtube Ads to grow your income.

SAS provides ready to run campaigns that you can use to dip your toes into internet marketing in a safe environment.

How Do You Join SAS Pro?

SAS Pro is just like any other training platform. You can join by first trying John Crestani’s free training. If you think the course is a good fit for you you can then join the program for a one-time fee of $997.

There are no monthly fees associated with your use of the system. Once you make your payment, SAS will give you access to its resources and webinars.

The company claims that its $997 fee is a steal because the program’s initial cost was $5000. In other words, anyone that buys it now is getting it at a generous discount. They also offer a monthly payment plan.

You also have those who argue that there is no evidence online to suggest that anyone has ever paid $5000 to acquire this system.

Some suggest that the discount claims Crestani makes are a lie to convince his customers that his training course is not as expensive as people claim.

It is worth noting that the company offers a 30-day money-back guarantee for anyone dissatisfied with the system.

The answer to that question depends on who you ask. Crestani’s company has a BBB rating of B+, which isn’t bad, and it is not BBB accredited.

The system’s official site has numerous positive testimonials, but critics argue that Crestani only highlights the select few SAS customers that have profited from it. He ignores the fact that the majority do not make the money he promises. Most notably, many of the success stories the system promotes are outdated.

Some people have gone so far as to call the system a scam. They argue that its most successful members make money, not from putting SAS’s teachings into action but by becoming affiliates of SAS.

The bulk of their earnings come from promoting SAS, selling the program to other people, and earning a commission along the way. Some of the system’s students have ruined their reputation by publishing content that teaches affiliates how to use shady methods to make money online.

Some have accused him of running a shady business, but based on my personal experience, the platform is legit.

How Is SAS Pro Different?

The SAS Pro is an updated version of the 2.0 system. 3.0, which is now called SAS Pro takes 12 weeks to complete. 2.0 only took six weeks. Crestani said he updates the program every 6 months.

The most current version has over a hundred hours of additional training content. Crestani doesn’t stop at showing you the ropes of affiliate marketing. He reveals the personal Ads and campaigns he uses to get ahead.

You can be successful with SAS 2.0. Those who wish to increase the likelihood that they will profit with the system can pay an extra $150 per month for the software they need to benefit from the updated version.

The additional upsell for the software gives them access to a more potent library of information. The 2.0 system differs from the original SAS because it is not an invitation-only system.

Who Is John Crestani?

Crestani famously makes millions of dollars each year from his affiliate marketing efforts. After achieving his financial dreams, he decided to give back by starting a training program that could help other people who wanted to succeed in the affiliate marketing space.

Some people think that Crestani can’t be trusted. This distrust stems from Paypal closing his account after discovering that he was selling products on eBay, of which they did not approve.

Some people will also point to the fact that Crestani cheated in school. Rumor has it that he made $1000 in a single day by hacking his university’s system and getting answers to exams he sold to other students. These actions earned him a suspension.

Crestani’s followers argue that his past shows the entrepreneur’s tenacity. It proves that he has an innovative mind and an unstoppable drive to succeed, as well as genius technical abilities online.

Critics, on the other hand, argue that Crestani’s previous crimes show that he is not afraid to cross the line and break the law to make money. Again, I don’t know if these accusations are correct, but only sharing what I have heard to provide a non-biased review.

How Much Can You Earn John Crestani’s SAS Pro?

According to Crestani, the people that follow the teachings of his program can earn thousands of dollars per month.

He uses his most successful marketers as proof. Some of them have six-figure monthly earnings.

What Does SAS Teach You?

Once you purchase Crestani’s system, this is what you can expect to learn.

SAS 3.0 will introduce you to the world of affiliate marketing. You will learn what it is, what it means, and how it works.

They will point you towards all the blogs, forums, and influencers that matter, not to mention the products you should target.

They will show you how to set up your business, the best way to turn visitors into paying customers, and how you can identify the right audience for your campaigns.

They will introduce you to the technical basics of affiliate marketing. You will learn about hosting, domains, landing pages, click-tracking, and the like.

You will learn about copywriting, the best methods to use when you generate content and the easiest way to produce effective advertorials.

Copywriting is known as salesmanship in print. It is the art of persuasion through the written word to sell products and services online.

You will learn advanced research tactics. You will see some marketing campaigns that have worked and those that have failed.

Students will review Crestani’s work. They will have the opportunity to replicate his steps, to find and copy high-converting landing pages, and how to outperform competitors.

SAS 3.0 will show you how to identify and avoid fraudulent activities online. You will learn to optimize your ads for more clicks and to split test the various aspects of your websites to increase your earnings.

You will spend time understanding why some people succeed in affiliate marketing, and others fail. You will master a mindset that will increase your chances of succeeding.

The system will show you how to leverage other people’s success. You will learn some programming languages.

The Super Affiliate System will teach you about Google, Facebook, and Native Ads.

How Is SAS 3.0 Different From Other Courses and Gurus?

SAS mirrors most other training courses and gurus in many ways. One of the few offerings it has that allows the system to stand out are the campaigns that Crestani creates, which his students are permitted to copy and execute.

Few other training courses provide this opportunity. SAS 3.0 doesn’t stop at telling you what to do.

It goes the extra mile and tangibly shows you the best methods to deploy in your attempts to succeed as an affiliate marketer.

There you have it, my John Crestani SAS 3.0 review in a nutshell. When it comes to internet marketing, there are tons of courses out there.

What makes John Crestani’s program unique is that he gives you all the tools and training to succeed. He provides you with winning ads and creatives that you can use to eliminate the guesswork.

So many courses out there will provide training, but not tell you exactly how to use their system by allowing you to copy their winning campaigns. If you’re looking for a reliable program to learn affiliate marketing, you might want to give SAS a try.