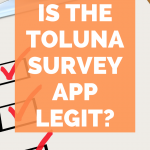 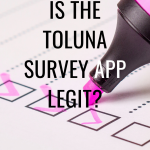 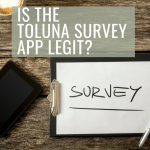 In this review, I’m going to provide a real answer to the question, “Is Toluna Legit?” Because let’s face it, there are a ton of survey sites out there.

Ultimately, what makes one survey right for one person versus another can come down to a couple of things. Maybe money earned for time spent. Maybe a variety of options to choose from.

Let’s see how Toluna stacks up to the competition in a crowded market with tons of options. No sense in wasting time if it’s not legit.

Let’s get into it.

Toluna is a well-known provider of online surveys. The company is primarily involved in connecting companies to consumers in real-time. The company describes themselves as a social voting community that allows businesses to brainstorm concepts and identify new business potential.

Toluna was founded in March 2005 by Frederic Charles Petit, who is the current CEO. Within just 15 years he had succeeded in growing the company to an international business. Since 2005, the company has absorbed many other related companies.

They have a global panel of “influencers” which they profile in order to allow matching with the appropriate companies. Currently, the company has over 26 million influencers in approximately 70 countries and regions.

📊 New research from Toluna has found that 49.2% of consumers follow influencers on social media, while 49.3% have bought at least once something based on a recommendation from an influencer they follow. pic.twitter.com/2G9CNMNscl

The company is headquartered in Vincennes, Ile-de-France. Their reach expands out to cover the following 5 regions:

They have also partnered with some of the largest brands in the world. Brands such as:

How Does Toluna Work?

With Toluna, every time you complete a survey you are rewarded with “points”. Exactly how many points will depend on how complex and time consuming the survey is.

Points may later be converted into cash. Unlike some survey companies that pay you with shopping vouchers, with this company you are paid through PayPal. The company also offers virtual gifts, which become real prizes and are delivered to your home.

Instead of receiving the cash via PayPal, members may also opt to gamble the points in a quarterly draw with prizes valued up to $6,800. They may also choose to redeem their points as rewards, or gifties (virtual presents).

Another option available to registered members is to apply to be a product tester. Applicants are selected by a draw. And the successful testers are sent products to test in return for reviewing them.

With surveys, these may vary in length. Anywhere from 1-2 minutes and some are 10-20 minutes with the higher paying surveys usually taking longer to complete.

There are two types of surveys. You have profile surveys and longer surveys. When a survey is launched, details are given together with an approximate point value.

How to Join Toluna

Joining Toluna is pretty simple. You can visit the Toluna website to get started. You can choose to complete a registration form or use a Facebook profile. Also, you can also sign up on the Toluna App.

You’ll need to respond to an email To verify your identity, which will be sent to the email address you provided. You can also provide your mobile number and Toluna will use it to notify you of new surveys.

You will need to live in one of the following countries to join the Toluna Panel (in alphabetical order).

The Toluna App is also available for download in the both the App and Play Stores for both iOS and Android platforms. The app connects you with a community of millions of members who share their opinions, help add value to big brands, and earn rewards. It’s free to get the app.

How to Make Money With the Toluna Survey App

The secret to making money with Toluna comes down to one word. Organization. To make money you will need to have a strict routine and act fast when surveys become available. If you only log onto the site once a week you will not find many surveys to complete and as a result you won’t make as much.

The Toluna website is designed very much like a community. In addition to completing surveys, there are a number of other activities going on. Some of these include playing games and entering the daily lottery.

By getting involved with the Toluna community you can also playing game and possibly win the daily lottery. The number of surveys open to you will depend very much on where you live. Some countries have more surveys than others.

Toluna says that their surveys will pay between 15 points and 50,000 points. But independent research has found that in reality, the majority of surveys are between 1,000 and 1,500 points.

Should you choose to be paid in vouchers, Toluna states that they will pay your vouchers within 8 weeks of your claim. But if you ask for cash to be paid to your PayPal account, payment will be almost instant. You will also lose any outstanding points if you decide to quit before withdrawing your balance.

Some of the companies in the US that offer vouchers are Starbucks, Amazon, Sears, Target, and Bestbuy.

Toluna is a legitimate company and does represent a way to earn money at home for completing simple tasks. As you can see the earnings potential is not as high as sites like Survey Junkie or Swagbucks.

But for those people who are looking for and content with these types of get-paid-to offers, this represents a solid opportunity. This site is certainly better than many of the other survey companies that I have come across.

In an industry with a lot of questionable companies, Toluna has received an A+ rating with the Better Business Bureau, which speaks to their reputation. And they are also accredited with the BBB.

Pros and Cons of Toluna

But if you want a reputable site to earn some extra cash on the side, then they’re definitely legit in that respect. My recommendation is look for a better paying site as there are plenty. If you just like to join them all, nothing wrong with that either.