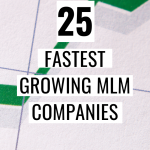 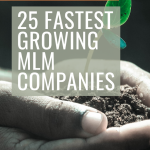 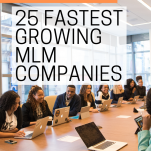 When tracking the fastest-growing mlm companies in the world, there are several factors that came into play.

When I analyzed the data I looked at several factors. The most important ones were revenue growth year-over-year, industries, markets, and products. This allowed me to put together a list of companies that are outpacing the rest. These are companies worth keeping an eye on for the year 2021 and beyond.

In a previous post I shared a list of the mlm rankings of the top 25 mlm companies by revenue for 2021. There is some overlap between both of these lists. But for the most part, you’ll see many different players on this list.

Here’s a closer look at the 25 fastest-growing MLM companies for 2021:

Amway (short for “American Way”) is an American multi-level marketing company. Their main products are in health, beauty, and home care. The company was founded in 1959 by Jay Van Andel and Richard DeVos and is based in Ada, Michigan.

In 2017, Amway was No. 1 in sales worldwide in the direct selling industry, according to the 2018 Direct Selling News Global 100.

Arbonne is a company that sells botanical and herbal based skincare and cosmetics.  The company was formed in 1975, by Petter Morck who worked for a Norwegian skincare and makeup company.  In 1980, he later moved the company headquarters to the US.

In 2017, Arbonne was named as one of the Direct Selling Association’s top 20 members.

Arbonne is an international multi-level marketing company that reportedly generated $541 million in net revenues in 2016. Arbonne generated nearly $600 million in sales for 2017.

In 2018, Arbonne and its sister company – Nature’s Gate, were both acquired by Groupe Rocher.

Avon is a leading global beauty company with nearly $11 billion in annual revenue. As one of the world’s largest direct sellers, Avon products are promoted by their more than 6 million active independent Avon Sales Representatives.

Beachbody LLC is an American multinational corporation that was founded in 1998 in Santa Monica, California. The company sells fitness, weight loss, and muscle building home-exercise videos.

Here are the methods that the company uses to promotes their products:

doTERRA International is an integrative health and wellness company and the world leader in the Global Aromatherapy and Essential Oils market.

Just seven months after it began, the company had $1 million in sales. By 2012, the company was regularly producing $1 million sales days. By 2015, its sales revenue had surpassed $1 billion.

After acquiring the company Aloe Vera of America in 1990, by 2010 the company reported a network of 9.3 million distributors and revenue of $1.7 billion.

Herbalife Nutrition is a global multi-level marketing corporation that develops, markets, and sells dietary supplements, weight management, sports nutrition, and personal-care products. The company was founded by Mark Hughes in 1980, and it employs an estimated 8,000 people worldwide.

The company is incorporated in the Cayman Islands, with corporate headquarters in Los Angeles, California.

Isagenix International LLC is a privately held multi-level marketing (MLM) company that sells dietary supplements and personal care products. The company, based in Gilbert, Arizona, was founded in 2002 by John Anderson, Jim Coover, and Kathy Coover.

In 2016, sales of Isagenix wellness and skincare products totaled nearly $1 billion. In 2017, the company reported revenues of more than $1 billion. Isagenix International also celebrated a significant milestone of $6 billion in cumulative global sales.

It Works! is a health and wellness company with all-natural products in the area of weight loss management, vitamins/supplements, and skin care.  The company also provides business opportunities for those who look to start their own home business.

It Works! also made the 15th spot on the list of the top 50 direct selling companies in North America. Inc.com ranked it at 442 on the Inc. 5,000 and the company had a three-year growth of more than 1,000 percent.

Although there is no available revenue after 2016, the company is estimated to have generated more than $800 million in 2017.

Jeunesse differentiates itself in the marketplace by combining breakthrough sciences in a system that enhances youthful appearances at a cellular level. The company also claims to use stem cell research in creating their product lines.

Jeunesse features a full line of health, skin care, and fitness products. Jeunesse generates $419 million in global revenue annually. The company is headquartered in Florida and employs under 500 people.

Since its inception in 2009, Jeunesse has posted impressive and consistent growth, becoming the youngest company in direct selling history to reach billion-dollar annual sales in 2015. In the following year, Jeunesse had reached $3 billion in cumulative sales, and climbing to $5 billion cumulative sales this past May.

Founded in late 2012 by Jason Camper and Paul Gravette, Le-Vel formulates and sells nutritional/health and wellness products and is the only health and wellness company that uses cloud-based technology for its day-to-day operations.

Melaleuca is a company that manufactures and distributes nutritional, pharmaceutical, personal care, facial care, home hygiene, and other wellness products direct to the consumer, through a full-service catalog and internet shopping system.

Melaleuca is one of very few companies in America that can claim to have increased its annual revenues in 30 of the last 32 years, and the Wellness Company went from $1 billion in annual sales in 2011 to $2 billion in six years.

MONAT is an international hair product corporation based in Miami, Florida founded in 1995.  The mission statement on their website is as follows:

“Our mission is to help people everywhere enjoy beautiful, healthy, fulfilling lives through our exceptional, naturally based products, a fun and rewarding business opportunity, and a culture of family, service, and gratitude”.

Nature’s Sunshine Products, Inc., (NSP) together with its subsidiaries, engages in the manufacture and marketing of nutritional and personal care products worldwide.

The company 2015 Revenue was $ 515.8 M. The company’s unprecedented success is reflected in Nerium’s cumulative sales of $1 billion after only four short years in operation.

Recognized for its historic growth, Nerium was listed as the number one Consumer Products and Services company on the Inc. 500 list of Americas’ fastest-growing private companies in 2015 and whilst also making the Direct Selling News’ Global 100 List for three consecutive years from 2013–2015.

Nu Skin Enterprises is an American multilevel marketing company that develops and sells personal care products and dietary supplements under its Nu Skin and Pharmanex brands. Nu Skin was founded in 1984 in Provo, Utah. The company originated in the United States and began its first foreign operation in Canada in 1990.

Oriflame is a leading beauty direct selling company. Oriflame has its origin in Sweden with corporate offices in Switzerland. The company offers a wide range of high-quality beauty products as well as a unique opportunity to become an independent distributor.

Oriflame has a presence in more than 60 countries and its wide portfolio of Swedish, nature-inspired, beauty products is marketed through approximately 3 million independent Oriflame Consultants. The company generated annual sales of roughly €1.3 billion in 2018.

Today, Oriflame’s business model largely comprises of an online model, with around 96% of all orders placed online. Respect for people and nature is the foundation of the company’s operating principles.

Plexus Worldwide, LLC is a manufacturer and supplier of health and wellness supplements and products in weight management, nutrition, and personal care. The company was founded in 2014 with headquarters in Scottsdale, Arizona.

Plexus Worldwide, LLC has been recognized as the 39th highest revenue generating direct selling company in the world by Direct Selling News Magazine’s Global 100. The Scottsdale based health and wellness company reported revenues of $562 million in 2017, a $30 million increase year-over-year.

Primerica, Inc. is a United States-based multi-level marketing company that sells insurance and financial services. The company’s headquarters are located in Duluth, Georgia.

Primerica spun off from its former parent company Citigroup through an initial public offering on April 1, 2010.

Rodan & Fields, LLC, known as Rodan + Fields or R+F, is an American manufacturer and multi-level marketing company specializing in skincare products. In 2002, Katie Rodan and Kathy A. Fields, creators of Proactiv, started the Rodan + Fields brand. A year later they sold the company and then relaunched the brand in 2007 as a multi-level marketing company.

In 2008, the company had just 1,350 consultants, which grew to 150,000 people in mid-2016. Today there are twice as many consultants. Revenue has also followed a similar trajectory.

Revenues of $456 million in 2016 put Scentsy in the 42nd spot on the Global 100 list. The brand is beginning to see new growth again after flattening out for a few years. Business for Home noted that Scentsy’s revenue increased by 6.29 percent between 2015 and 2016.

Young Living is a multi-level marketing company based in Lehi, Utah that sells essential oils and other related products. The company was founded in 1993 by Donald Gary Young.

In September 2014, the U.S. Food and Drug Administration warned Young Living over the illegal marketing of its products as treatments or cures for Ebola virus, and other conditions, including “Parkinson’s disease, autism, diabetes, hypertension, cancer, insomnia, heart disease, post-traumatic stress disorder (PTSD), dementia, and multiple sclerosis.

The company continues to experience rapid growth as the company announced that its 2017 and 2018 sales both surpassed $1.5 billion.

Young Living has surpassed $1 billion in sales in each of the last four years and its revenues have grown 800% over the last five years.

Youngevity International, Inc. is a fast-growing, innovative, multi-dimensional consumer products company. They offer a wide range of consumer products and services, primarily through person-to-person selling relationships that comprise a “network of networks.”

Younique LLC develops and markets cosmetic products for skin and body care under the Younique brand. Since it was founded in 2012, Younique has reached more than 4 million customers in 10 countries. The company has more than 200,000 consultants, called presenters.

In 2016, its revenues were $400 million, up 6% year-over-year, according to Business for Home. After 2016, the company does not disclose its income statement.

The 25 fastest growing mlm companies who all earned a spot on this list had huge revenue growth. These companies fared very well in a number of other factors as well. When doing your due diligence, it is important to look for a company that is in a growing industry and has a uniquely differentiated product.

Too often I see mlm companies marketing products that are simply me-too products and don’t bring value to the marketplace. With the main goal being bring in more distributors into your downline to sell the opportunity.

It’s hard for a company to make this list if they don’t have solid products that can stand on their own and are differentiated in the marketplace.